A Renewed Spirit in Clay

Here's a copy of an essay, written by David Whiting, that accompanies the on-line exhibition. I've had stuff written about me before, but never by somebody that I haven't met. I'm really very pleased with this essay, he's got it absolutely right.

Doug Fitch and Geoffrey Fuller
A Renewed Spirit in Clay 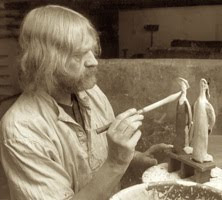 Doug Fitch and Geoffrey Fuller both live and pot in areas which have their own strong traditions of slipware, and their work is perhaps best understood in the context of its older vernacular history rather than its more recent studio revival – one that began with Leach and Cardew in the 1920’s and 30’s.

They are country-based craftsmen – Fitch in Devon and Fuller in Derbyshire – as immersed in their landscapes as they are in the most direct and expressive quantities of clay and slip. Modern studio slipware can be wonderfully vibrant but, more often than not, it woefully fails, as evidenced in some of the group surveys of this medium in recent years. There is a tendency to squeeze the life out of the clay through precision-control techniques of throwing, turning and decoration.

Not the case with Fitch and Fuller. They make work that preserves that almost 1ndescribable tremor of wheel and hand, of the soft subtleties of their materials, much in the spirit, despite each potter’s individuality, of their craftsmen forebears.

Geoffrey Fuller, the elder of the two, is Derbyshire-born and studied pottery at Chesterfield in the 1960’s(where my father Geoffrey was one of his teachers), followed by a spell at Farnham. His artistic roots are complex; starting out as a stoneware salt - firer, he looked to early European pottery and the earthy directness of traditional Japanese wares. These remained important influences, along with other country pottery traditions and folk art in Europe and beyond. Then there is a specific slipware heritage; Buckley, North Devon, Ewenny and the beautiful pieces made in North Staffordshire, not so distant from Fuller’s home.

Anonymous exemplar pots line the shelves of The Three Stags’ Heads, the atmospheric pub he and his wife have run since they moved to Wardlow Mires over twenty years ago. There is Portugese saltglaze, pieces of slip, large earthenware crocks, Staffordshire figures. And while he admires and possesses much studio work, he has strong views about a craft that can over-refine, that can try to compete with the natural voice of the material. He stresses the difficulty of maintaining that necessary balance and dynamic in his own work. It is not something you can force, it comes from a deep but often elusive empathy with the clay. What is so rewarding about Geoff’s pots and figures is their quiet renewal of tradition.

His tablewares have some of the feel of medieval vessels with their gently pulled and squeezed forms, their soft earthy coloration with thin washes of slip that soak into the clay. The way he applies decoration, the way he articulates a jug or indents the rim of a bowl gives the finished object a sense of freedom and preserved plasticity. His splendid figures may remind us superficially of Staffordshire flat-backs and pew groups, but there is also a broader language of art and imagery to which they are related, from Romanesque carvings on Norman churches and medieval wooden misericords to naïve 18th century pub wall paintings and popular broadsheet tailpieces. Fuller’s figures communicate with the same fresh directness and mystery, but they don’t lie in the past. They are modern objects that enliven and humanise our domestic spaces. They are wonderfully life affirming.

Fuller and Fitch employ a palette naturally reflective of their physical environment, the place from where their minerals derive. Whether it be the hills and crags of Derbyshire or the green valleys and varied coastline of Devon, the hues and texture of their locations are expressed in the quiet ochres, greens and earth-browns that distinguish these pieces.

With such a strong earthenware inheritance in Devon, it is not surprising that Fitch initially used the famous Fremington clay to make pots so redolent of that land, and now he digs the material from his own patch. But Fitch isn’t a Devonian by birth. He studied pottery at Derby in the early 1980’s before eventually moving here in 1990 to become a technician at what is now the University of Plymouth. He established his own pottery at idyllic Stockleigh English in 2004, where he built a large wood-fired kiln.

Much as Fitch admires Michael Cardew and has a special regard for his near-neighbours Clive Bowen, Nic Collins and Svend Bayer, he, like Fuller, particularly loves the countrypots made from medieval times onwards to serve local communities – jugs, dishes, brewing jars, spigot pots and so forth. His bold wares possess many of their qualities, generously potted with thick creamy glazes. Minimal decoration is often wiped through or turned to reveal rich underlying colour. Their quirks of form, a sturdy handle or flattened lip, recall 14th century detail. His jugs and big storage jars have a reassuring solidity and are full of engaging character and personality. They are pots that exude the magic of this particular maker’s ‘return to the land’ and the lasting values he finds there.

Fitch epitomises what might be described as a new ‘Devon School’ in his approach to pottery. Here in the West Country, are a small group of potters who, engaged by the extraction of local materials, by a particularly expansive attitude to making firmly rooted in locality, and by the high drama of kiln firing, have imprinted their work with a new elementalism. Doug Fitch and Geoffrey Fuller may be geographically more disparate, but both have, in similar ways, greatly freed up narrower modern definitions of craft to return to an essentially pre-industrial, pre-studio attitude to clay, one of considerable force and strength.

ooh ahh.. thats a good yarn and rather precise...congrats on the show mr fitch

lovely write-up doug... they're spot on as you devonians might say. it wasn't until i read you referred to as a devonian that i made the connection. louisville, kentucky, where i live, is situated at the falls of the ohio river and now to allow barges up and down the river a large dam partially closes off a portion of the river when water is low to force the part that's not closed off to deepen so vessels can keep moving. why mention this? because when the dam shuts off part of the river, it exposes a marine fossil bed (read oceanic, not freshwater and kentucky is very far inland). this fossil bed is one of the largest fossil beds in the world containing a plethora of life forms from... you guessed it, the DEVONIAN period of the paleozoic era. (416 to 359.2 million years ago) and named for devon, england where rocks from this period were first studied.

Very Nice indeed Mr Fitch.
Glad to see the Cider Flagon has sold. it's a stunner.

Hey Mr Fitch. Just look at those gorgeous time less pots, Well it's saturday night and i've just returned from the pub. I hope that what I write on your blog will not be too much nonsense? Just like an old engine needs more lubrication to loosen up. I seem to be the same. It is great to have you as a friend, To share the same ideas about the work that we do. Sometimes as I'm sure you are the same, To question yourself about the life style and work produced can be very trying. Am I selfish? Should I make something that will sell? Or should I follow what my heart tells me???? Well I know as you do, A good pot is made from the heart of a good person and is more rewarding than any amount of cash . Your pots have that part of you in them, That makes them far more valuable than any amount of cash. Keep potting from the heart Mr Fitch. I hope that I won't be embaressed by my loosened head and words! Keep on potting Doug and It's good to have an old fellas moan on the phone. All the best, Nic.

So good when a writer gets it right! Lovely to read of potters who still have the countryside running through their hands!

(Just tried to send a longer comment, but google swallowed it whole and it is lost for ever somewhere! The internet is terrible at the moment)

I had a parcel from Jeff and Stella recently with a lovely DVD contained therein. I gather that they got you to burn a copy of your photos of Slipware at the Burton, Bideford. And I am enjoying them very much indeed, so a big thank you to you from us Downunder!

Good to read that you had a successful weekend at Rufford.

Enjoyed reading this article....knowing I have a jar of yours on my mantle!

Hey folks, thank you all for your kind comments, I appreciate them all, I don't get on here often enough to respond, it's always great to hear from you. Fascinating about the geology Jim, it's something I don't know enough about, but one day hope to learn.

Nic, only just found your message, sweet words, thanks mate :)The only way we can do it is from the heart. Look forward to more moaning on the phone soon!

Glad the cd got to you Peter, beautiful pots those old potters made, I'll take you there to see them when you come over/under/up