Well the kiln's packed tonight with a gas burner running overnight to drive off any moisture. It's been a really busy few weeks, with many long days, the last two nights I've been at work until 10.30 so I'm pretty tired - a mouth full of ulcers, nice.

I've made a lot of pots though- mostly jugs - that always seems to be the way. Now the kiln's packed, there are quite a few pots left over. They'll go into the next firing which will be precisely a month after this one, when I'll be sharing a kiln load with Alex. Here are some pictures, (in no particular order) of some of the pots in tomrrow's firing 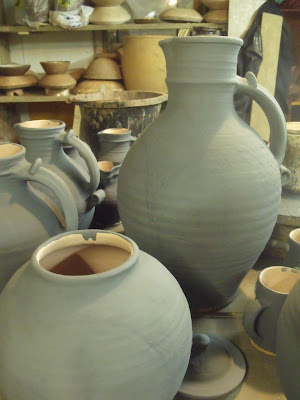 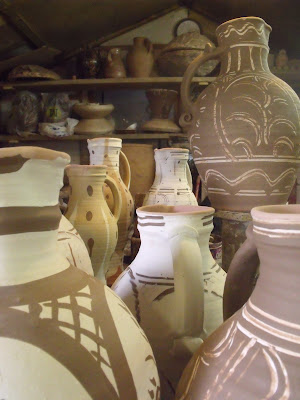 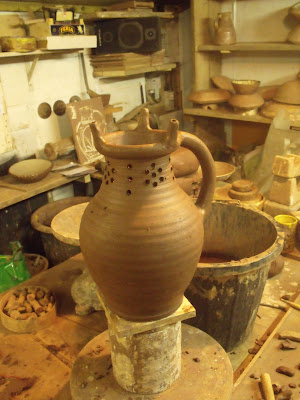 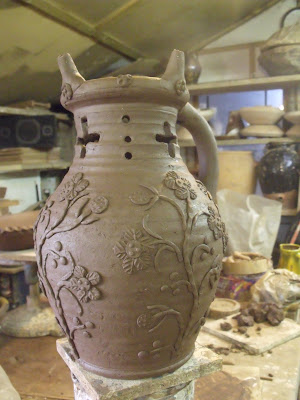 Some puzzle jugs I made earlier in the week 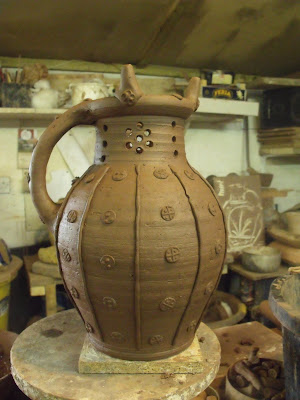 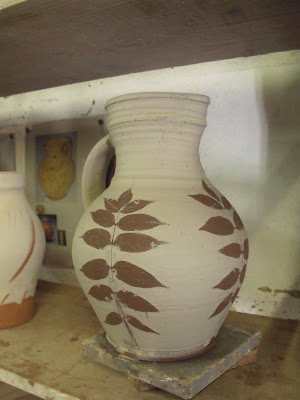 Oak and ash leaf resist jug, the leaves taken from trees outside the workshop. 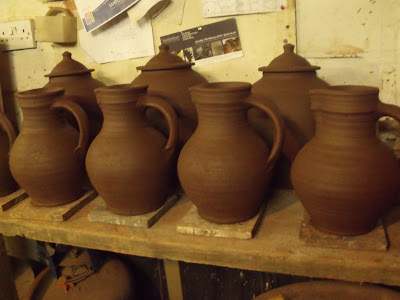 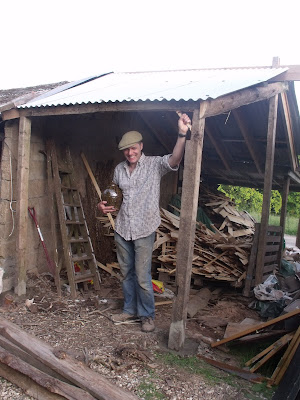 My mate Frank who came at the weekend and helped me get the back on the woodshed roof - cheers Frank. 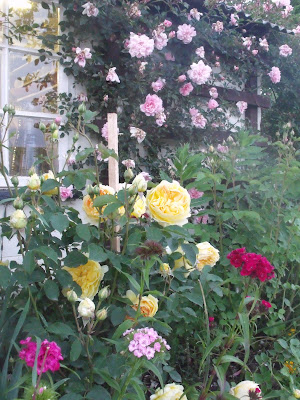 The workshop garden looking pretty. I'll do a bit outside tomorrow during the slow part of the firing - cut the lawn, plant some more stuff, generally tidy up. I like to tinker in the garden on firing days.
Well a bit of a disjointed blog post - I'll try and keep this a bit more up to date once things calm down a bit. Crazy, when there's loads going on, there's never enough time to write about it.
Keep your fingers crossed for me tomorrow - by Friday I'll be either elated or despondent.
Shower, then bed time, another long day tomorrow. Goodnight all
Posted by doug Fitch at 23:17

Here's hoping that you win the firing tug-o-war this time!

gorgeous deco work as always, have a super firing i hope the woods all dry and take lots of yummy things to munch on while firing tomorrow..

Rock on Doug. Have a great firing!! Can't wait to see the exhibition w. Fuller.

Here's hoping the puzzle jugs come through. They are beautiful!

Very engaging Blog with wholesome pots, though I couldn't see any fired pieces. I guess I'll have to look elsewhere.

I believe my friend Doug Navarra has been in contact with you. In fact, we were loading my Anagama/Noborigama kiln this weekend and he asked whether I knew you or your work. Unfortunately I didn't, but then another friend -- not at all in the clay world -- just forwarded the announcement about your show with Geoff Fuller.

I'm originally from Duffield, Derbyshire and met Geoff 10 or 12 yrs ago when out in the Peak with my folks. I was also at Clive's, Svend's, Mike Dodd's, Phil Rogers, David Leach's etc. etc. and own many of their pots. What an interesting world of coincidences!

I pre-heat tomorrow and fire through Sunday. Made fabricated sculpture (starting at Derby College of Art in 1966/before your time!), environments, painted, potted, now ceramic wood-fired sculpture. Check it out at www.TonyMooreArt.com. The kiln's on the Bio page.

Good fortune with the firing. I'd love to own one of your big jugs!

I'll be waiting and hope for a good firing!