It's been ages since I blogged - there's been lots of stuff going on and I just haven't had time to sit down and do this. It doesn't take long to get behind, not just with putting on here what I've been up to, but keeping up with what everybody else has been doing too.

Here's a catch up from the last few days.

Last week ended with the slip on these big jugs. I decided to keep them fairly simple, with the pinstripe emphasising their tall, slender form. 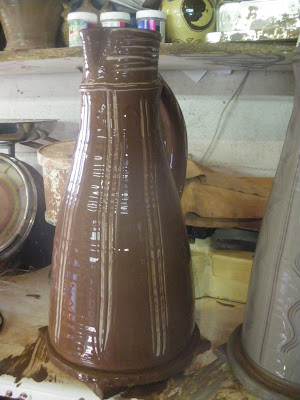 This one should become black with golden stripes. There was a small jar that came out of the last firing, the stripes were fiery orange - I hope this one works like that, it'll be quite striking if it does I think. 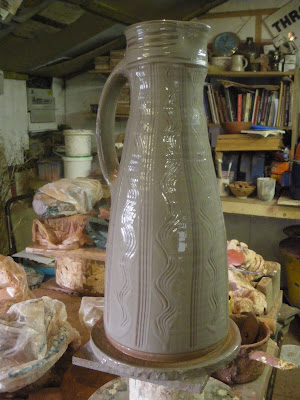 This one is green with black lines. I've used this design on a few pots in previous firings, but never on a straight sided form like this. It seems to work well on either straight or bellied shapes. I'll use a very pale glaze over it so that the green slip should be a lively, bright shade. 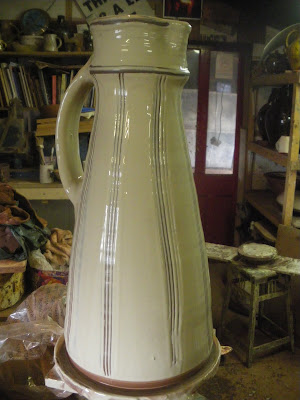 And this one will be amber and yellow - maybe a little green glaze, I haven't decided yet whether it'll need it or not. When it's fired, there'll be a lot more contrast in the areas that look quite flat at the moment.


Luke turned sixteen at the weekend. My boys are growing up so fast, it feels like they're growing and I'm shrinking - I guess the fact is, that's the truth. Luke's quite a few inches taller than me now. We had a fab day out at the footy on Saturday and watched Exeter win, which was a great birthday treat. 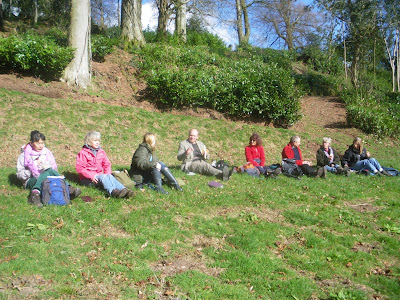 On Sunday I went up to Fursdon House to meet up with a group of artists with whom I'm doing an exhibition in May. The show is to be of work created in response to the countryside of the estate. 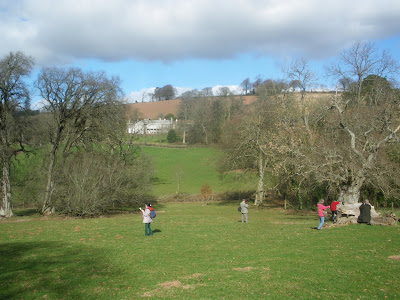 It was a beautiful day. I used to live on the Fursdon Estate, so I know it really well. I miss it too - we moved back into the village a couple of years ago because it was too remote for the boys and they needed to be closer to their friends. Here are the artists exploring the environment. I'll write more about them on a later post. 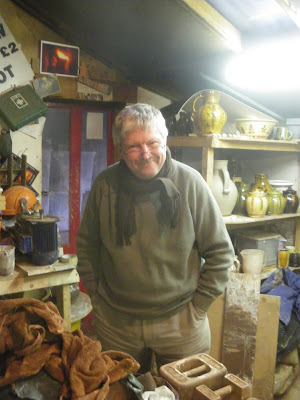 On Monday John Edgeler came to stay. He's the author of some really excellent books and owns the Long Room Gallery in Winchcombe where the Derby Boys Show is going to be held in April. 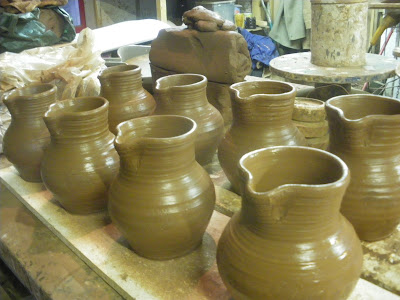 John and I talked about plans for a forthcoming Slipware event that's to happen later in the summer. I'll post more about this later too - it's going to be really good and requires a more thorough explaination than I can manage in tonight's post. 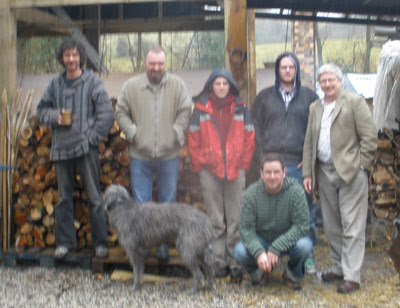 Yesterday we went up to Nic's. He was firing his kiln full of pots for his spring on-line show. Blogger Andrew was there helping with the firing and so was Pete, a former student of Nic's - great to see them. Sabine was busily putting the music to one of Nic's latest videos - nice choice Nic! 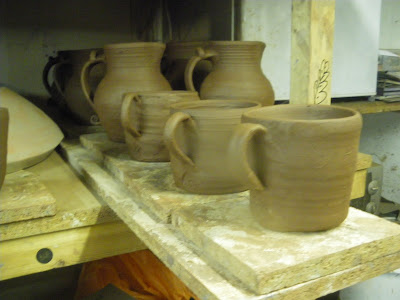 John left at about lunchtime.

Here are the little jugs I made earlier in the week, all handled, and in the foreground, some mugs that Jess made today. She's getting quite a few orders for her pots now which is really good. 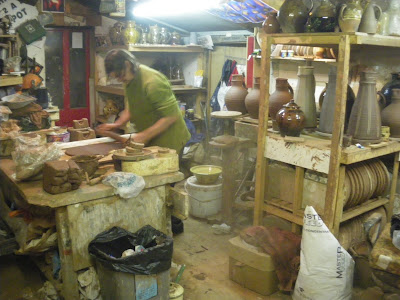 Marky Mark came up this evening 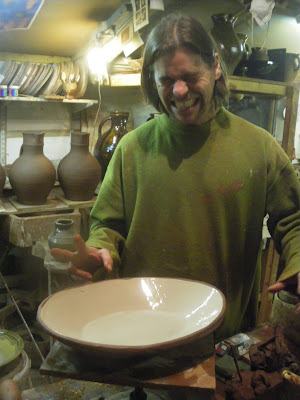 And slipped a moulded dish. We worked on into the evening. We'll do the same tomorrow - lots to do, many pots to make before heading off to Scotland in a couple of weeks.

So that's what's been going on. 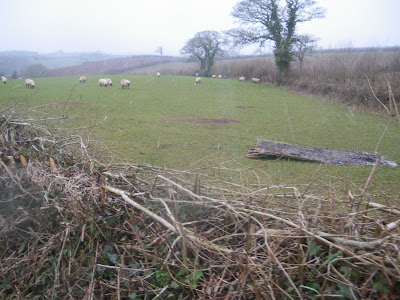 My head's in a really good place at the moment - full of the joys of Spring, in spite of today's snow.

Happy Thursday everybody.
Posted by doug Fitch at 21:48

well hello there you are! good to see you've been up to much stuff..and lovely little vid, i do like a moving picture show..... cheers ang

Gosh, you have been busy. I know what you mean, I keep trying to write a post but just haven't got the time, after I've looked at everybody elses blogs... I allot myself a certain amount of time each day or else I wouldn't do anything to blog about.....

Nice jugs as usual.
That's a big ladle Nic has, for a big pot I guess.