Well life has been really busy lately. Since I last blogged, I've fired the kiln, taken part in a two day workshop on Dartmoor with Nic and Adam, said farewell to Adam and Hannah, driven to Cambridge and hung an exhibition and now I'm visiting my parents. Back to Cambridge tomorrow for the private view, home Friday, gig in deepest Cornwall on Saturday. Sunday, maybe I'll have a lazy day. 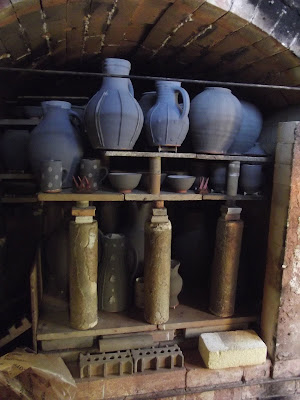 This is a shot of the pack. Adam and I had worked long hours to get enough pots together for the firing, with a short deadline.


Here's a video of the firing. Hannah came down from the frozen North and Frank came up from the sunny South to help. It went really smoothly - it took about fourteen and a half hours. 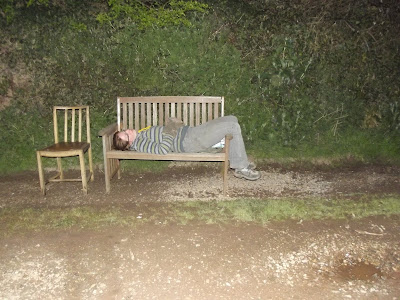 It was all too much for one particular stoker. 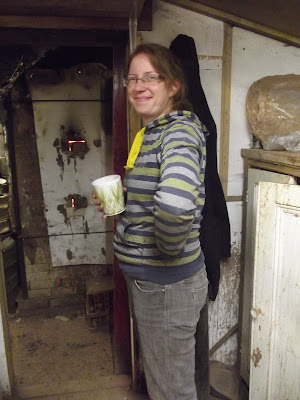 I wonder if it was something she drank? 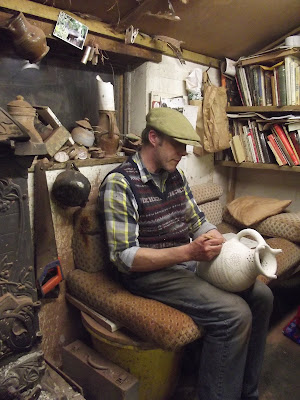 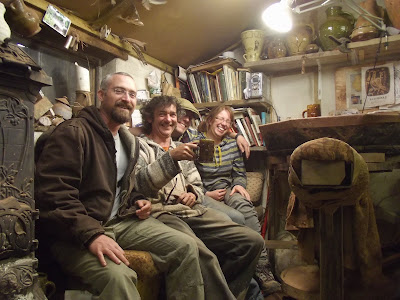 
And here are the results. There were some very dark pots, but some splendid shiny bright ones too. It was a firing full of information - I had new glazes throughout the chamber which worked well and a number of raw pots, including 'The Cardinal', so named by Dixie - the big, raw glazed baluster jug that I'd placed in the hot spot. It's a very green Cardinal, if there can be such a thing. It fired really successfully, which bodes well for future kiln loads of large, raw pots, although I fancied it to become much more gnarly than it did - I must try harder to over fire next time.

We unpacked the pots, then headed off to Nic's workshop, where Adam gave a talk on Friday evening.

The next day we were there again, bright and early and Adam, Nic and I demonstrated our various and varied skills to a crowded workshop. It was quite daunting for me, sitting between these two amazing craftsmen. Nic and I were at college together over twenty five years ago and in spite of my nervousness, it was great to be doing this alongside him all these years later. His attitude and approach have really taught me so much in my relatively short career as a full time potter. The video isn't very good, as I was supposed to be working, not filming, but it'll give you a rough idea of what was going on.

This final film was made on Monday night and Tuesday in the gallery in Cambridge and the studio of one of the exhibiting painters, my almost lifelong friend, Simon Jowitt. It also features Jono Lloyd, another of the exhibiting artists. It's very unusual for a potter to get the opportunity to exhibit with painters of this caliber, I'm really pleased to be part of it all. The show opens tomorrow evening. You can find out more about the group here.

I'll report back from the show after the opening. Time for bed for a tired little me
Goodnight all
Posted by doug Fitch at 21:59

I think a lazy day is in order! Get right on that and quit mucking around making beautiful pots and running around doing great things.
Lazy is not a bad thing, for a bit.

You're really on a roll!
You deserve a breather

rsorivYou've been a busy lad Doug:-) wonderful to see it all. Great pots and it seems your fortunate to share it with good people. My regards to them all.

I knew that Cardinal was a bit kinky he clearly adored all those flames but out he steps dignified, a little stiff but drawing himself up to his full height, inspite the weight of his decorated clerical robes. Welcome Your Eminence, ignore that Fitch man and avert your gaze from that Hannah who Drinks we are all dignified by you Presence

Neat to see the work in the exhibition space. I'm off to check out the work of the other two. I like what I could see there in the video. Get some rest.

Congratulations on such a successful firing! Beautiful work!
I hope the exhibition goes well!

Thanks all
Dixie, that's funny :-D