Well I'm just about to hit the road, to fight my way through the Glastonbury traffic and head off up to Nottinghamshire and Earth & Fire at Rufford Abbey Country Park.

Rufford's probably my favourite show of the year, it certainly feels like it's the most prestigious. This year though I'm feeling a little more trepidation than usual as I have to give a jug making demo on Sunday afternoon. I don't know why this one seems more scary than others, I've done loads of demos this year and should be getting used to it. It's one of those ones where you're mic-ed up and there's a guy sitting on the side of the stage with a microphone asking loads of questions - as if this stuff isn't hard enough to do in private, let alone in front of a throng of people. Oh well, I'm sure it'll be over in a flash - just three days to worry about it.

I'm disappointed to be missing my older son Luke as he goes off in his glad rags to his end of school ball tomorrow night. We took him out a couple of weeks ago and bought him a new suit, since the picture was taken he's had a tidy haircut(which has pleased his Mother no end) - whatever happened to my little baby? He finished his last exam yesterday - now the long wait until the end of August to find out how he's got on. I think he'll do well, he deserves to, he's worked very hard. 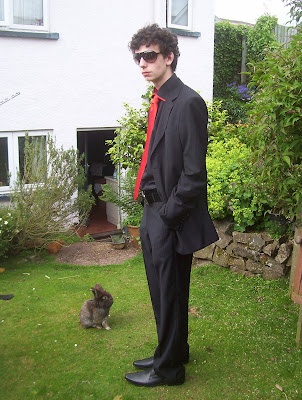 Thankfully I'm not having to camp this weekend as I'll be staying with an old college chum Brigsy who lives nearby. Svend and Nic and Sabine will be staying too, so it'll be a house full of potters. I really don't enjoy camping much these days - I'm getting soft in my old age. Last weekend at the slipware event the camping facilities were very, very basic, plus my hotwater bottle leaked and I forgot to put the square thing on top of the tent and it poured with rain, so I was soaked from all directions - a comfortable bed is very much more appealing.

Well I can procrastinate no longer, I'd better go and leave my rural retreat and face the real world and a busy motorway. I'll report back next week. Happy weekends full of fun everybody, take care.
Posted by doug Fitch at 11:53

ahh, leave the trepidation at home you'll do fine..happy demoing....is that a bunny or lukes hair..?

Hope all goes well. Nice shot of Luke there with the family pet.

No doubt you're on your way now, Doug, but good luck anyway. It's nice when the kids grow up, isn't it?

Saw you at Rufford today, bought two pots. Delighted with them, wanted to buy more!
Come back next year when I've had chance to save up again.

Christ Doug how many telephone/mobile numbers do you have? Been trying to google you for an hour cos all Damon's numbers seem to be out of date!! So we may miss you at Rufford. Luke is quite the mini-me isn't he?? Doesn't seem 2 minutes since you looked like that. Nikki

Well nothing to worry about. The demo was great. At least no one walked out before the end!! Well except Damon and me but then we've been watching you throw for 25 years!! Back in the days when you didn't need to throw the top seperately!!! Just been watching Glastonbury - can't believe Luke is there .. nor can I believe he's perhaps watching bands I've heard of. I like the stuff you're doing nowdays .. mind you that could be insulting for you since I suppose it means they're getting prettier. You certainly set Damon off .. he wants to make pots again. Fatal, it's like me watching showjumping. Anyway lovely to see you again. Shame Hillary couldn't make it. See you soon. xx :.)

Thanks all. Thank you Carolyn, it was good to meet you at the weekend, I really appreciated your enthusiasm for what I do, I hope you get continued enjoyment from the pots.

Yes, Luke's a big lad now. He was right at the front moshing to Blur at Glastonbury on Sunday. It is nice to see them grow up, but strange too, watching them develop their own independance. I'm very proud of my boys.