Hi there boys and girls.
Well I've got nearly all my pots together now, ready for the opening of my exhibition, next weekend. 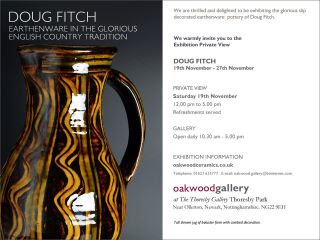 It's been hard toil, working every day, every weekend for I don't know how long. They've been long days too, often way into the night and I'm absolutely exhausted. I think it's been worthwhile - next Saturday will tell, when I get to see the pots displayed in the beautiful surroundings of Thoresby Hall. Things look so different, when they're given space, it's difficult to see the pots clearly in the workshop surroundings. I've never seen so much of my own work, in the same place at one time. 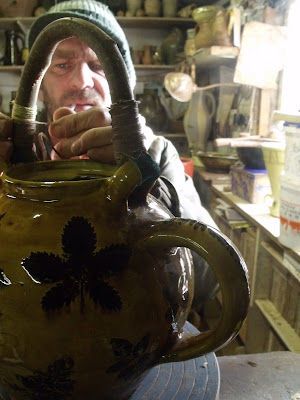 Here's Different Dave, fixing a Hazel handle to my hedgerow teapot - it worked a treat, I'll post a picture of the teapot later.
The last three firings have been fantastic which has made so much difference to my state of mind. I used to have too many losses and starting again after a bad firing was so difficult. I'm still very aware of the shortfalls in what I do - I need to expand my range so that I don't predominantly make jugs............I do love making jugs(pitchers) though. 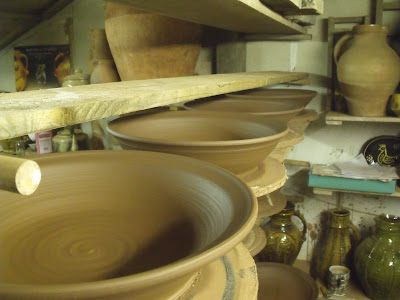 I actually have some flatware in this show - not as much as I would have liked, but some pieces at least. I'm pleased with them and I'm desperate to make some more. 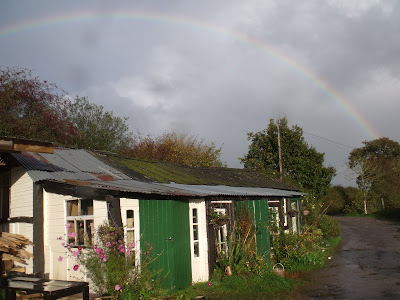 It feels like things are at last starting to fall in to place, after a lot of hard work building this place up from scratch over the last eight years on a shoestring budget. That's how long ago it is I think since Marky Mark and I began building the workshop inside the shell of an old cattle shed - maybe it's seven, I can't remember. I will have been in there full time for six years this January - or maybe it's five -it's a blur.
Whatever it is, I'm still making really stupid mistakes - I managed to crack a good number of my bigger pots by not drying them carefully enough, or by glazing them too dry, but that's because I was stretching my skills and knowedge - disappointing, but now I've learned a few lessons the hard way and next time I'll get it right.
Well enough rambling on. Thank you to everybody who has continued to drop by on this neglected blog, I always appreciate your support and comments and I know I'm very bad at responding, but I really do appreciate it, I've just been getting home too late to get on here.
I decided not to post pictures of finished work until the show opens, but I will share a short video with you of a sgrafitto jug that will be in the show. It's taken many, many hours of scratching.

Well there's lots of other stuff I need to blog about, so I'll be back soon with, among other things, some details about an exciting weekend event that's coming up.
Tomorrow, selecting and packing of pots, ready to deliver them to Nottinghamshire on Wednesday. I'll be glad to get them there.
Goodnight all
Posted by doug Fitch at 22:15

I wish I lived closer or at least had disposable income to fly over and see the show, I would really like to have that teapot!!!!
I started reading your blog in 2009 and you have come so far with your work, it's been fun to watch! Best wishes for a fabulous show :)

Have a great show Doug.

Dee and I wish we could be there, Doug. It sounds like it's going to be a great show. Good luck!

I love the fact that you're known for your jugs!!! but flat ware is such a nice place to deco on....


I must get up the results of our slipware workshop soon and am starting to realise what goes on with the slips and the layering, thick and thin.... they may all come out quite brown yet :P

That is a lovely shot on the publicity poster/leaflet.

wow love the hazel handle! Good luck with the show I can imagine it must be quite overwhelming seeing all that work in one place.

Nice to see what you've been doing--you've had your hands full! Good luck with the show--I'd love to be there--but can't quite jump the pond! Fondly yours.

Can't wait to see the hazel handle in all its glory, I like the idea of using something from this country rather than bamboo.

wish I could get over to the private view but I at a Fair on Saturday and I don't think my wife would like it if I left her to it.

Absolutely beautiful Doug. I so wish I could just hop across that big pond and see the pieces in person! Much luck to you for a great show ... I know it will be fantastic.

I love the flat dishes as well, can't wait to see them done. They would make a great pie!

It will be incredible to see all the work displayed in a lovely setting. Should be a well deserved and rewarding success. All the best for it.

Hey you lovely bunch of blogging chums, thank you so much. I wish you all lived nearer, but I love that I have had the chance to meet most of you :)