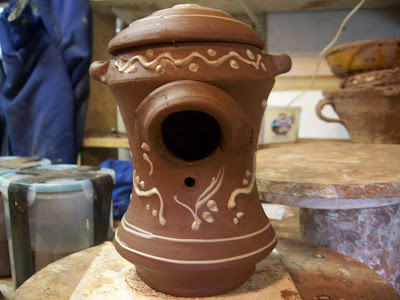 Here's a birdbox Brad made yesterday. There's a small hole in the front into which a dowel will be fitted, then it can be hung on a tree by a chord through the lug handles. 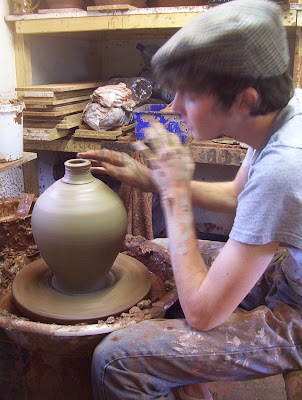 This is Brad in his 'Englishman's hat', throwing a bottle/jug with grey/gray clay from the field behind the workshop. It'll be interesting to see what this clay fires up like, Matt and I dug some clay out that was a yellower colour/color a while ago and it came out of the kiln a beautiful orange terracotta. This stuff looks like it's probably a stoneware clay, it's certainly got a lot less iron in it than the yellow stuff. 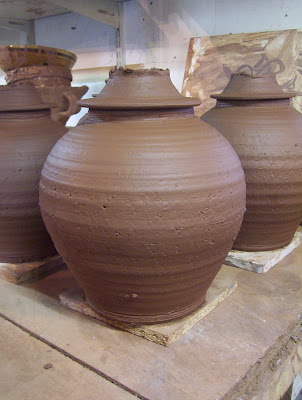 These are some jars that I threw yesterday. I've been trying to break the habit of making in batches of six, so made four of these with six pounds of clay and four with ten. The lids will be turned today and I'll throw the knobs on too. It's been damp and humid the last couple of days, but today's a scorcher so we'll be able to dry pots in the sun, that'll speed things along a bit. It's going to be a late start, but hey, it is Saturday. More later, have a nice day y'all..............
Posted by doug Fitch at 10:22

what i woulnd't give to have stoneware in my backyard.